Dynamic Closures Goes to Jail for a Worthy Cause 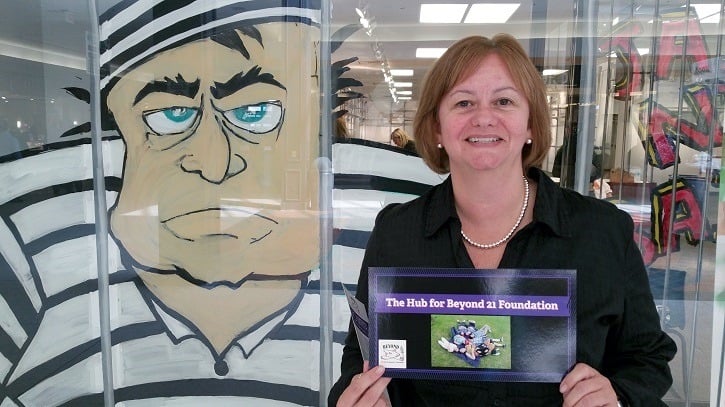 On April 26, 2017, Dynamic Closures Operations Manager Christine Warner was working at her desk when two Cornwall Community Police Service Officers arrived. Christine was handcuffed, put into the police vehicle, and taken to “jail”.

That jail was actually a store in local shopping mall Cornwall Square, and the bars were cut out of paper.

It was all part of the “Post Bail” charity fundraiser, in which participants are taken away by real police officers. Friends, family, or in this case Dynamic Closures, have to donate “bail money” to have the person released.

The bail money was a donation of $500 by Dynamic Closures to Beyond 21’s “Post Bail” fundraiser. Beyond 21 is a United Way organization that helps developmentally challenged adults live connected, respected, and productive lives in the Cornwall community.

All told Christine spent about an hour in jail before rescuers arrived with the cheque.

“It was my first and hopefully last time in the back of a police car; but the police were great about it; and it was all for an excellent cause,” laughs Christine.

According to one source, the idea for participating in the fundraiser was suggested by Bonnie Clendinneng, Dynamic Closure’s Lead Shop Floor Hand, who (coincidentally) works under Christine. Bonnie brought it to General Manager Michael Mahoney who selected Christine as the arrestee.

“I knew I was a good idea, as Mike Mahoney and Dynamic Closures have always been big supporters of Beyond 21,” Bonnie was overheard saying, “and this was a fun way to help a local charity.”

Officially, however, Bonnie denies all involvement with planning the arrest. “I had nothing to do this, it was someone else’s idea.” Wink, wink.

The funds will be used as prize money and supplies for Beyond 21’s 3rd Annual Chili Cook Off coming up in fall or early winter. This is a great community event that Dynamic Closures has been proud to sponsor in the past. 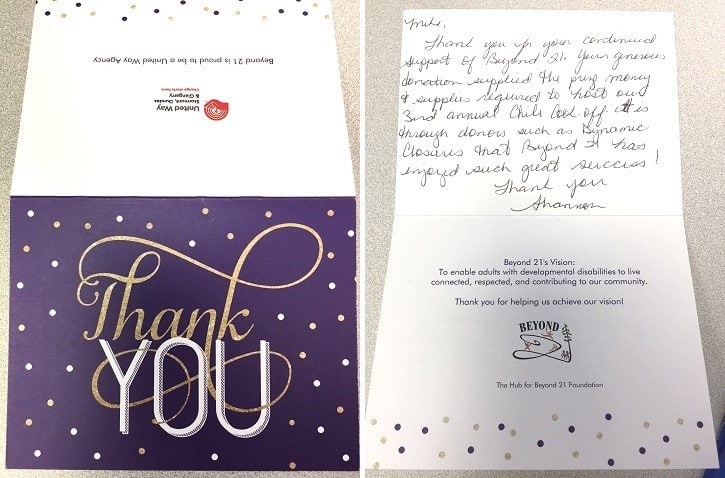 Roll-Up vs Side Folding: Which Security Door Should You Choose?

Why is Retail Floor Space Important?

Got a question or need support?

Monday to Friday, 8AM – 5PM Eastern
or Contact Us Online 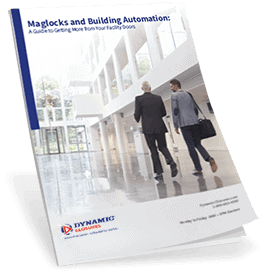